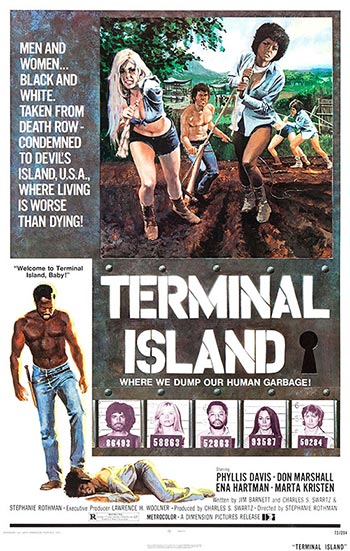 In the wake of a Supreme Court decision to outlaw the death penalty, California passes an initiative that designates San Bruno island as a dumping spot for first-degree murder convicts, free to do what they like except leave. The main camp of convicts is controlled by the tyrannical Bobby, who rules with an iron hand, and the women are used as sex slaves. A.J. and a group of more free-minded murderers have escaped and gone into hiding. When A.J. and his men liberate the women from Bobby’s custody, tensions mount to an all-out confrontation for control of the island.

After the Supreme Court outlaws the death penalty, California circumvents the ruling by sending murderers to a secluded island, where they are declared ‘legally dead’ and expected to kill each other off. Four intrepid ladies spend some miserable time in the hierarchical sexist work camp on one side of the island, then run off to join the liberated comrades on the other side. There’s some pretty big statements waiting to happen in there, and they come through loud ‘n’ brassy, but they are made in the firm confines of a rockin’ 70s drive-in action movie. This is a co-ed prison flick on a cheaper set, with a great bunch of weirdo characters floating around and future Magnum P. I. cast members sweetening the pot. Smart and well made too.