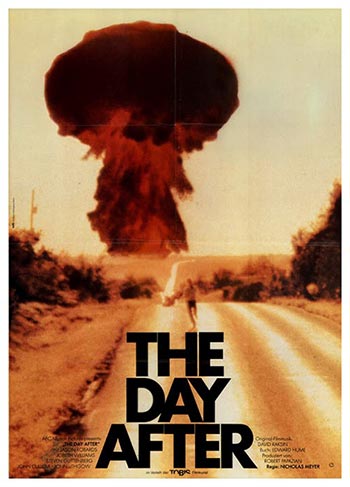 The countdown has begun! Against the real-life backdrop of the U.S. deployment of WMDs in Europe during the escalating Cold War, this “dramatically involving [and] agonizingly graphic film” (The Hollywood Reporter) about nuclear holocaust detonated a direct hit into the heartland of America.Starring Jason Robards, JoBeth Williams, Steven Guttenberg, John Cullum and John Lithgow, this “controversial, potent drama” (Leonard Maltin) remains “one of the most talked-about programs in history”(Newsweek)! When Cold War tensions reach the ultimate boiling point, the inhabitants of a small town in Kansas learn along with the rest of America that they have fewer than 30 minutes before 300 Soviet warheads begin to appear overhead! Can anyone survive this ultimate nightmare…or the nuclear winter that is sure to follow?

The Day After is a 1983 American television film that aired on November 20, 1983, on the ABC television network. It was seen by more than 100 million people during its initial broadcast. It is currently the highest-rated television film in history.

The film postulates a fictional war between NATO forces and the Warsaw Pact that rapidly escalates into a full-scale nuclear exchange between the United States and the Soviet Union. However, the action itself focuses on the residents of Lawrence, Kansas, and Kansas City, Missouri, as well as several family farms situated next to nuclear missile silos.