The Dead Are Alive (1972) Armando Crispino 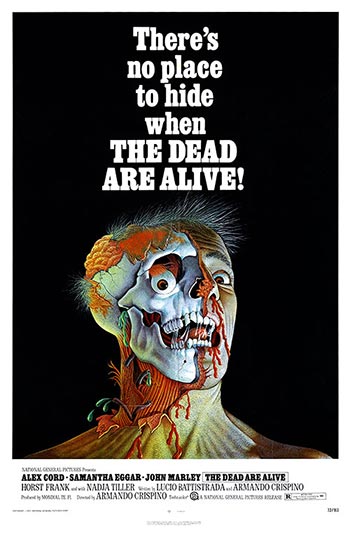 A photographer on an archaeological expedition digging up Etruscan ruins in Italy begins to suspect that not all the Etruscans buried there are actually dead.

Armando Crispino’s clever and classy entry from the Golden Age of the Giallo (1968-75) has nearly all the conventions one expects from the genre: an innocent (?) American abroad somehow connected to a string of violent crimes, ineffectual police detectives, quirky suspects, nubile victims, red herrings, brutal bludgeonings, suicides, and an insane killer that may come as a surprise. There’s also a shoe fetish, a homosexual, a bottle of J&B Whiskey, a wild car chase, and Riz Ortolani’s score to hold viewer interest. This colorful, well-made thriller, based on a short story by Bryan Edgar Wallace, was released in the U.S. as THE DEAD ARE ALIVE.