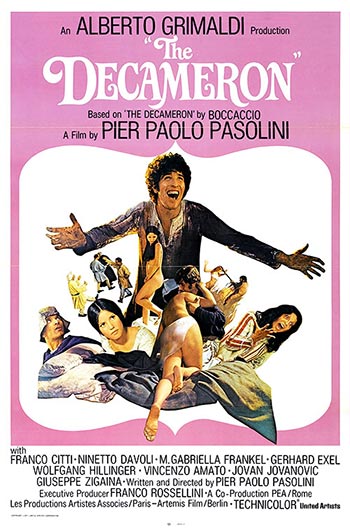 An adaptation of nine stories from Bocaccio’s “Decameron”: A young man from Perugia is swindled twice in Naples, but ends up rich; a man poses as a deaf-mute in a convent of curious nuns; a woman must hide her lover when her husband comes home early; a scoundrel fools a priest on his deathbed; three brothers take revenge on their sister’s lover; a young girl sleeps on the roof to meet her boyfriend at night; a group of painters wait for inspiration; a crafty priest attempts to seduce his friend’s wife; and two friends make a pact to find out what happen= s after death. Pasolini is up to his old tricks satirizing the Church, and throwing in liberal doses of life and love.

Director Pasolini films nine tales from the Decameron. Most deal with sex (very explicitly) but almost all show a very ribald sense of humor. Easily the director’s most cheerful film–it’s best described as “earthy”.

This is the first of Pasolini’s three feature-film adaptations of obscene tales of antiquity, the other two being “The Canterbury Tales” and “The Arabian Nights.” It contains ten of Boccaccio’s most famous tales… The bawdiest story concerns a merchant who back-doors his partner’s wife by promising to tell her his secret of turning a woman to a female horse and back to a woman again…

The stories are quite funny and the acting is adequate especially for non-professionals… But the film’s charm is in its unrefined energy…It spends as much time showing nude men as it does showing nude women, which was quite unusual for its time…