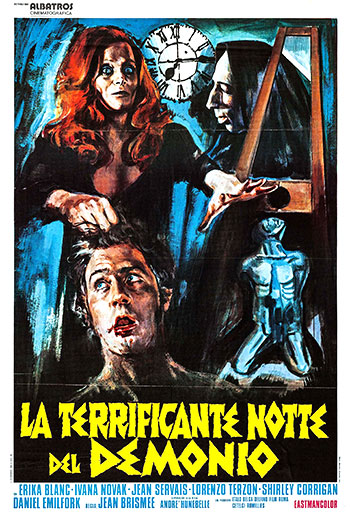 Six of seven tourists in a east European castle overnight are victims of a helper of the devil. Is Satan willing to spare their souls?

This is one of your better Italian Gothic horror films (maybe they should have done more co-productions with Belgium). The simple plot concerns a group of travelers who end up stranded in an eerie castle. The travelers supposedly represent the Seven Deadly Sins. They are picked off one by one by a sexy female succubus played by the sumptuous Erica Blanc.

There have been a million movies like this over the years, but two things set this apart. One is the atmosphere of horror it creates. This film wasn’t directed by any of the Italian Gothic horror greats like Mario Bava, Antonio Marghereti, or Riccardo Freda but it evokes their best works (“Black Sunday”, “Castle of Blood”, “The Ghost”).

The second though is Erica Blanc who manages to be both very sexy and very scary (the latter with the help of some good effect make-up). Interestingly, Blanc has only some very brief nude scenes here, but she plays such a seductive and deliciously evil character so well (especially when she preys upon the hapless priest) that she manages to steam up the screen far more than the two Euro-lesbian characters who spend half their screen time cavorting in the nude. Along with her famous coffin strip tease in “The Night Evelyn Came Out of the Grave” this one of Blanc’s most memorable roles and worth the price of admission by itself.