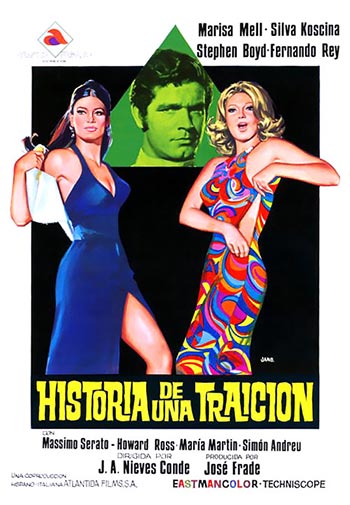 A seductive woman gets involved in relationships with several people. All of the characters play games of deceit with one and other and things get more and more dangerous.

Wonderful European Exploitation, above average sleaze. This is somewhat of a lost gem in the eurotrash world, made in 1971, it remained unreleased in the US until after the 1974’s THE STING ( which is mentioned on the US poster art for THE GREAT SWINDLE ). This is not a giallo with violent murder set pieces, but instead a well acted mystery with an ever twisting plot that even saves a revelation for the final seconds. The cast is above average here with the gorgeous Mell and Koscina in a lesbian relationship and providing plenty of nudity. Stephen Boyd and Fernado Rey are solid and while Boyd’s character is central, the film is mostly about Mell’s tortured Carla and her love life with men and women.

This is top notch eurotrash, with sleazy characters, murder and mystery. This is a movie where no one is who they seem and motivations are suspect and then surprisingly reversed.