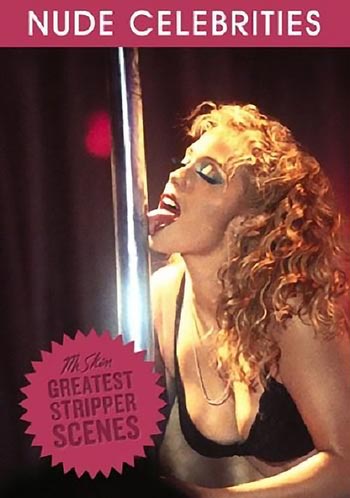 When sexy celebs are gripping the pole there is bound to be a spectacular finish. Join bump-and-grind babes like Jessica Biel, Marisa Tomei, Lucy Liu, and more on Mr. Skin’s Greatest Stripper Scenes .

Elizabeth Berkley is at the top of her show-business class during a leztastic raunch fest with Rena Riffel in “Showgirls.”

Demi Moore shows off her rock hard body and DD duo in “Striptease.”

Marisa Tomei lets out her mouthwatering mammage during an Oscar nominated striptease in “The Wrestler.”

Daryl Hannah’s hoots are heaving while she shakes her thong-clad cheeks in “Dancing at the Blue Iguana.”

Rae Dawn Chong takes out her supple spotlights on stage for a long scorching hot dance in “Fear City.”

Ravishing redhead Jessica Chastain presents her stiff-nipped peaks for our enjoyment in “Jolene.”

Shannon Elizabeth rips off her black bikini top to unveil her amazing knockers in “Dish Dogs.”

Angel-faced brunette Charlotte Ayanna pulls out her perky peepers to grip the pole in “Dancing at the Blue Iguana.”

Nicole Eggert peels off her PVC dress and out come her peachy little pontoons in “Secret Sins.”

Seth Rogan gets a face full of Nautica Thorn’s colossal cans in “Knocked Up.”

Jennifer Tilly’s behemoth bazongas get plenty of screen time in “Dancing at the Blue Iguana.”

Bad cop Nikki Schieler Ziering will get you taking out your own baton in “American Wedding.”

Charlie Spradling spends a long time perfecting her topless pole routine in “To Sleep with a Vampire.”

Natalie Portman works the stage in some skimpy skivvies in “Closer.”

Coco shows off her massive mega-melons in “Angel Blade.”

Penelope Ann Miller shows off her peaks while shaking it onstage in “Carlito’s Way.”

Wendy Hamilton and Julie K. Smith show off their bountiful boobage during an acrobatic exotic dance in “The Dallas Connection.”

Asia Argento wedges the pole between her cheeks, shakes her pasties, and tongue kisses a dog in “Go Go Tales.”

Tit-tastic Tonie Perensky serves up a double helping of hoots as a naughty teacher in “Varsity Blues.”

Roselyn Sanchez is auditioning at the strip club and with those terrific torpedoes she’s surely hired in “Yellow.”

Rose McGowan has got nipple lids on but her moves are spectacular in “Roads to Riches.”

Sandra Oh will have you saying Oh Yeah! with her petite pair exposed onstage in “Dancing at the Blue Iguana.”

Alice Braga strips and shimmies on stage, then trots her tanned tits out into the crowd in “Lower City.”