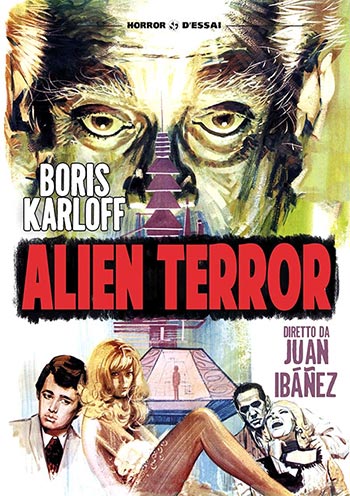 In the European village of Gudenberg in 1890, Prof. Mayer and his assistant Isabel have created a powerful ray machine. One of the powerful rays is shot into space and attracts a flying saucer. The alien pilot decides that the ray poses too great a threat to the universe and must be destroyed. Sex murderer Thomas is possessed by an alien intelligence and infiltrates Mayer’s household; Mayer himself is later taken over by an alien mind. Paul Rosten, a young scientist who is in love with Mayer’s niece Laura, arrives. The alien “Mayer” and “Thomas” rig the ray gun to explode, killing all who know its secret. Thomas kills Isabel, but before he can murder Laura, Mayer throws off the alien intelligence and she is saved. Mayer realizes that the ray is too powerful for human use, and he destroys it. The flying saucer departs.