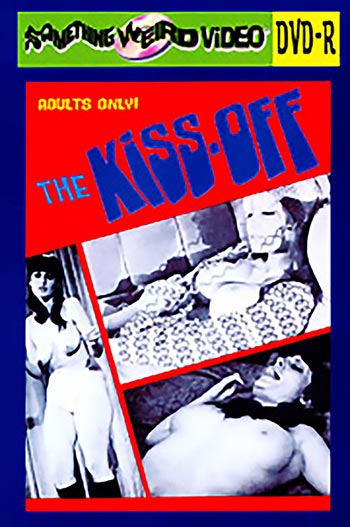 Debasement and debauchery abound in La-La-Land!

Meanwhile, Sam Schwartz (GARY KENT of Girls From Thunder Strip and Sinthia, The Devil’s Doll), a private dick, is in the throes of passion with his girlfriend Terri when he gets a call from a smut peddler who hires him to find his wayward wife Micki. (Sam’s also informed that Miss Micki has an insatiable appetite for chicks and gang bangs!) But, before Sam goes on assignment, he first watches Terri go-go dance at a bar, then clobbers the cretins who ogle her.

Completely unaware of what’s happening, Sam is on the make with a flat-chested floozy in the back of her car. After getting his rocks off, he comes home to the sordid scene and takes justice into his own hands. What a guy.

The Kiss-Off was shot in Los Angeles and stars some of the cast of One Million AC/DC.