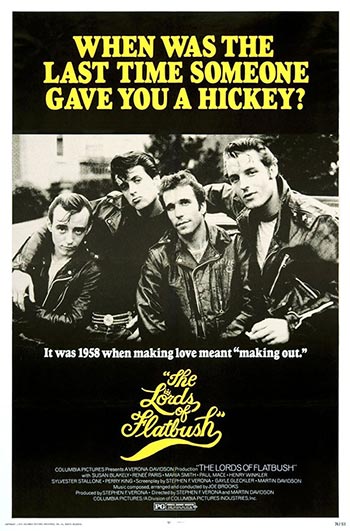 A group of kids in Brooklyn form a gang. From this moment on they do everything together. This makes things easier but at the same time they have to face new problems.

This is Grease without the pop music, the glitz of commercialism or the poor costumes. One thing that makes any stage or movie production is the ability of the watcher to believe that the characters are actually not acting, but living the part they portray. Lords of the Flatbush fulfils this criteria as the audience is taken back to the 1950’s. Strangely enough, the 1950’s wasn’t all about driving around in pink Cadillacs and wall to wall Elvis Presley. Lives had to be led life had to be faced, complete with it’s problems and struggles. This wonderfully understated film shows all that and more. If you liked the idea of Grease, but found that it’s presentation was about as believable as rocking horse droppings, then this film will satisfy your need much more than it’s more celebrated counterpart can ever do.