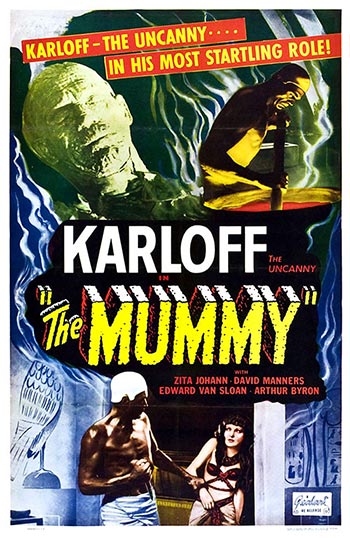 In 1921 a field expedition in Egypt discovers the mummy of ancient Egyptian prince Im-Ho-Tep, who was condemned and buried alive for sacrilege. Also found in the tomb is the Scroll of Thoth, which can bring the dead back to life. One night a young member of the expedition reads the Scroll out loud, and then goes insane, realizing that he has brought Im-Ho-Tep back to life. Ten years later, disguised as a modern Egyptian, the mummy attempts to reunite with his lost love, an ancient princess who has been reincarnated into a beautiful young woman.

Moody, understated and succinct, The Mummy is one of the best films from Universal’s classic horror period. Although much of the success can be credited to first time director Karl Freund, who normally worked as a top cinematographer, and the brilliant make-up artist Jack P. Pierce, it is Boris Karloff who gives the film its resonance. As he previously did with the Frankenstein monster, Karloff imbues this character with an aching sense of humanity which was completely absent later incarnations of the Mummy character. Credit must also be given to the able supporting cast including Zita Johann and the always reliable Edward Van Sloan.