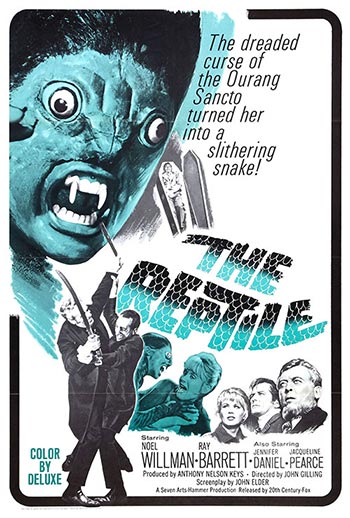 Harry Spalding and his wife Valerie inherit a cottage in a small country village after his brother mysteriously dies. The locals are unfriendly and his neighbor Dr. Franklyn (a doctor of theology) suggests they leave. They decide to stay only to find that a mysterious evil plagues the community.

This film is one of the best period horror films of it’s day. The costumes and sets are lavish and the acting is notable. The ‘Reptile’ itself is hinted at but not seen for most of the film, building suspense. It is a shame that the video box shows what the Reptile looks like, lessening the shock when you see it on the screen. The make up was very ahead of its time, much more realistic than other films of its day. The only problem about the film is that it plays like a mystery, but we already know what is going on. People die after getting on the neck. No one knows who or what is doing the killing. A good guess on our part would be, the Reptile. By the time the players figure that out, we have already have figured out who is the Reptile. The film is a little low on terror and gore for a Hammer film, but writing and effects more than make up for it. Plus the film boasts one of the best ‘dead body POV shots’ ever filmed. A must for any Hammer fan!