The Room of Chains (1972) Gérard Trembasiewicz 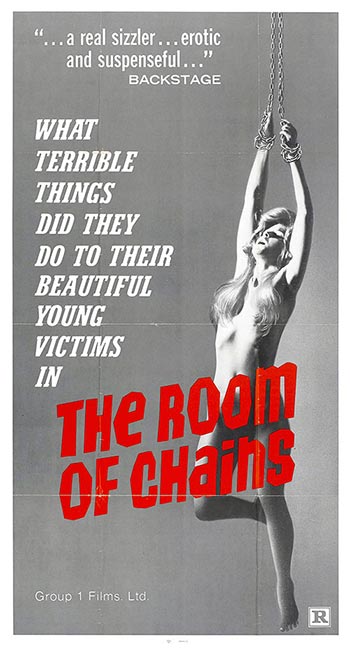 For fun, two men kidnap and torment women in bondage.

Pretty cool little Euro shocker here from France, best known by horror aficionados for director Jean Rollin, whose films ROOM OF CHAINS most closely resembles for want of a comparison. Rather than being a kinky vampire movie this one’s an equally kinky and somewhat less preposterous modern day tale about two businessmen having an affair behind their wives backs.

But they aren’t just closeted homosexuals or even bisexuals cheating on their wives, they’re both psychopaths who engage in a pretty sleazy little game. To get themselves in the mood for love one of the guy’s dresses up in a disturbing looking disguise and roams the country roads waiting for nubile young maidens to pedal by on their bicycles. He runs them off the road, konks them over the head, and takes the girls back to the country villa where the two guys engage in their private games away from the prying eyes of society.

There they have a room prepared like a dungeon, and as can be predicted for such material the girls are stripped, wetted down a bit, and chained up while the two ogle her shapely form through a peephole while she suffers. Occasionally they will don robes and abuse the girls in a surprisingly gentle manner, but for the most part they just want to look and drool over the prospect of having such complete control over someone. When they’ve gotten their kicks they usually deposit her right where they found her, traumatized but none the worse for the wear.

Meanwhile a police procedural into the abductions is underway, setting up a completely hilarious running motif where the young victims enthusiastically doff their shirts and display their wares to both the inspector & the cameras. In spite of the homosexual theme the film is almost a non-stop parade of attractive French actresses being undressed or undressing for the camera along with some softcore romping with their real life squeezes. One can’t help but wonder if in the complete original French version more details of the homosexual affair may have been explored, though that’s not the point of the story and its hardly a “gay” movie.

As if that weren’t already enough to make a pretty groovy movie, the older of the two psychopath starts to become unhinged and entertain torture fantasies — one of which is pretty far out — that begin to spill into his everyday life. It isn’t enough anymore just to look and he starts taking the game more seriously, resulting in some deaths. His home life starts to fall apart, his wife confronts him with evidence that he’s been cheating on her, the younger guy decides he’s in love with a fetching young lass & wants out, and the rest should be left a surprise.

Very worth seeking out, with a fantastic music score as well by French composer Guy Skornik. Good old Something Weird Video have it on their web catalog for now though it certainly is worth resurrecting for a proper restoration.