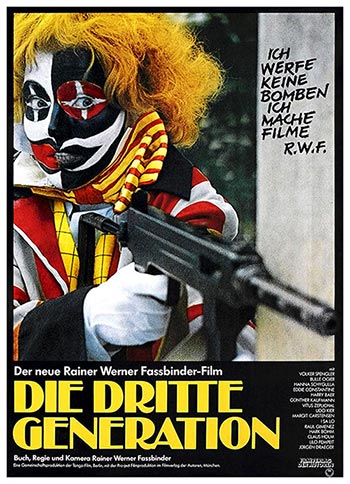 The Third Generation (1979) (Die Dritte Generation) is a black comedy about terrorism. The film follows a group of leftist bourgeois aspiring terrorists who kidnap an industrialist during carnival season unaware of the fact that they have been manipulated by the capitalist and the authorities whose hidden agenda is that terrorism would create demand for security hardware and allow harsher security measures by the government. The actions of the ineffectual cell of underground terrorists are overlaid with a soundtrack filled with newscast, voiceovers, music and gibberish. The political theme of the film aroused controversy.