This Night I Will Possess Your Corpse (1967) José Mojica Marins 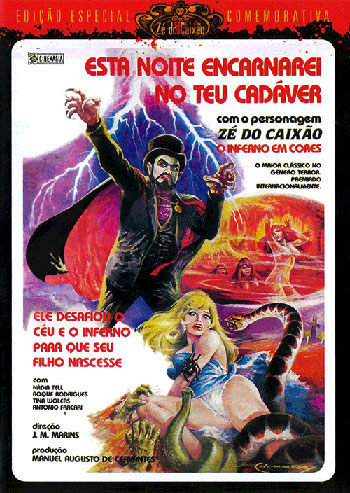 Coffin Joe is still looking for the perfect woman to give birth to a son of his, and, cleared of the past crimes in the first film (At Midnight I’ll Take Your Soul), keeps terrorizing the people in his small town with his iconoclast and sadistic practices.

Jose Mojica Marins is definitely a director whose films are many times overlooked. His character Coffin Joe is almost like the Freddy or Jason of Brazil. “This Night I’ll Possess Your Corpse” is the second Coffin Joe film. After the evil undertaker has been cleared of his crimes, he’s back to causing trouble yet again. He kidnaps beautiful women and looks to impregnate one of them to start a perfect race. After the ladies get tormented by spiders and snakes he kills them, leaving only one lady. What makes this scene horrifying is the 100 snakes and spiders that the actresses had to endure. The ghost of the one women vows to return from the dead and take vengeance on him, or is it just his imagination? It’s never quite clear. Coffin Joe is an angry atheist who finally finds his evil mate which is the colonel’s daughter. Even after him and his hunchback assistant smash her brother’s head with a rock, she still likes him. She even skips her brother’s funeral to get it on with him. The film’s most memorable scene is it’s surreal psychedelic ten minute Technicolor vision of hell. Death takes Coffin Joe to hell and he sees people scream in agony as they are whipped and tortured. In the scene fire, brimstone and snakes surround him wherever he goes. “This Night I’ll Possess your Corpse” is chilling, gory, bizarre and subversive in it’s religious and social themes. It’s definitely a classic work of Brazialian cinema that deserves more attention.

This Night I Will Possess Your Corpse (1967)