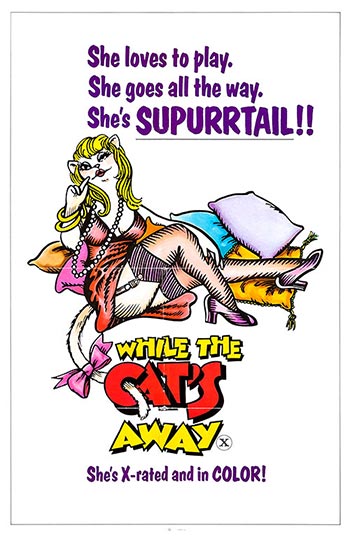 This HARRY NOVAK release from noted sexploitation director CHUCK VINCENT is an inventive and amusing send-up of early Seventies sex mores, perfectly capturing the spirit of many men’s publications of the day.

Sales are down at Expose magazine (’All the Filth that’s Fit to Print!”) so the worried editor sends Lurch (J.M. EVERETT), a bumbling Clouseau-type undercover reporter, to document the sex life of the typical American housewife, something which ordinary readers will identify with. Chosen at random from the telephone book is Mrs. Jones (pretty KATHRYN FORD) but, as Lurch soon discovers, she is anything but a typical American housewife…

After failing to interest her husband in a little wake-up b.j., Mrs. Jones offers him a nude breakfast by cracking eggs over her pert breasts and shaking the orange juice between her supple thighs. From this moment on, While the Cat’s Away becomes little more than a series of enjoyable vignettes, as we watch Mr. and Mrs. Jones go about their daily routines (and if my daily routines were anything like this, I’d be dead within a month).

Mrs. Jones receives more than simple oral treatment from her local dentist (“You have a nasty little hole that I need to fill!”), while Mr. Jones has sex with some anonymous pick-up in the stairwell of his office building. The next stop for our little lady is the beauty parlor where she switches from AC to DC with the manicurist while the old lady next to her prattles on incessantly about the dreadful state of the world.

While Mr. Jones seems to do nothing all day but have sex at the office, Mrs. Jones arrives home to find the mailman waiting at the front door and the milkman at the rear. A hot manage a trois results, with Mrs. Jones finding all sorts of creative ways to combine sex and housework. As the day progresses, she just gets busier and busier. She picks up a hitchhiker in her VW and has sex with him in the woods,gets the butcher to slip the meat to her, greases up the mechanic at a service station, and even manages to seduce the padre at a church bazaar sale. With the day finally done, she picks up her exhausted husband and they head home for a quiet evening. While the cat’s a way, indeed…

Though obviously shot on a shoestring. While the Cat’s Away (an ALLAN SHACKLETON production) features stylish camera work from STEPHEN COLWELL, enthusiastic performances from all involved, a virtual smorgasbord of wall to wall sex, and even a surprising appearance by CALVERT DEFOREST (a.k.a. “Larry ’Bud’ Melman” of David Letterman fame)! Director Vincent went on to a prolific career in both the hard and softcore smut fields with films like Hot T-Shirts (79), Hollywood Hot Tubs (’84),and Deranged (’87) before dying of AIDS in 1991.