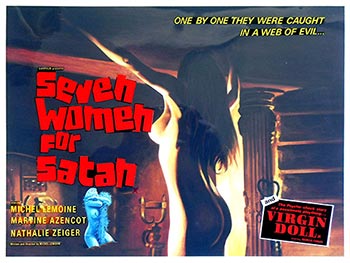 Boris Zaroff is a modern businessman who is haunted by his past — his father was the notorious Count Zaroff of The Most Dangerous Game fame. Consequently, Boris is subject to hallucinations and all-too-real social lapses which normally involve sadistic harm to beautiful naked young women. His butler is sworn to indoctrinating him into the evils of the family line, and their castle’s torture dungeon proves quite useful in this regard. However, Boris is periodically lured away from his destiny by the romantic apparition of the deceased countess who previously owned the castle.

Wow – this is one of those early 1970’s European sleazy sex flicks warped in a “horror” film – there IS plenty of gore and also lots of nudity but the true joy of this dubbed version we saw was the unbelievably unintentionally hysterical dialogue.