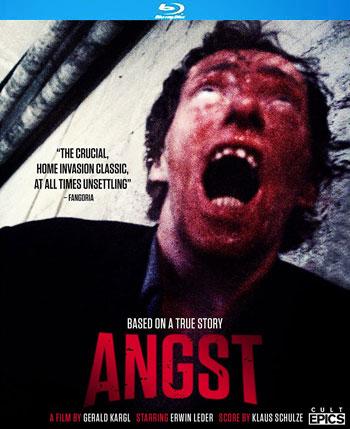 A man is released from prison after serving four years for murdering an elderly woman. He quickly begins to feel the compulsion to kill again. After failing to murder a cab driver, he flees and discovers a secluded rural home, where a young woman lives with her sick mother and retarded brother. He then begins to take out his sadistic pleasures on them, attempting to hold them hostage, while thinking of his troubled childhood with his abusive mother and grandmother…

Angst is without a doubt one of the best serial killer flicks in the history of cinema. And some would say The Best.

Angst follows a serial killer who is released from prison after a 10 year incarceration. What takes place is shocking and original film-making. What this man does is just start up where he left off. It’s basically just following around the killer and just getting to know him. Oh and his victims, but in a more or less personal way. Eesh.

Angst excels in all facets. The acting by the main character, the serial killer, is flat out great, in an insane sort of way. He looks the part, and definitely acts the part. The scene when he’s in the car is unforgettable. Throw in great cinematography, direction and writing, and the fact that this is a truly disturbing, realistic look into a serial killer’s obsessive habits, it easily makes this one of the best serial killer movies of all time.