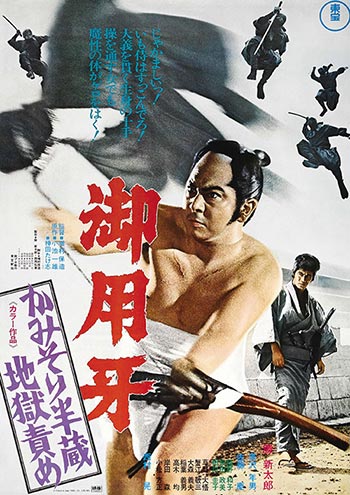 Against the backdrop of the Edo treasury devaluing currency and driving many into poverty, Hanzo Itami enforces the law without regard to status. He shows inadequate respect to the treasurer, who wants him dead. He finds a young woman dead following an abortion, and he enters a temple without permission looking for evidence. He tortures and then sexually assaults the temple’s priestess to get information. He’s then assigned to protect the mint from a notorious thief. There he closets himself in the bedroom of the mint’s mistress. He waits. The thief arrives – but other crimes are afoot. Devalued currency, white slavery, and government corruption lead Hanzo to one conclusion.

This is the 2nd movie in the Hanzo The Blade trio of wonders. It’s made by the people who made the classic “Lone Wolf And Cub” gorefest series but it’s much more sick. Good production values, beautifully shot and acted make this sickie even more extreme. Our “hero” is a twisted Dirty Harry samurai who make (female) criminals talk with the help of his HUGE PENIS!!! In Part 1 you see him “training” his member with ricedolls, big rocks and boiling water!?! The women always hate it at first but then starts enjoyin’ it, Hanzo then stops and they ask for more, and they get it only if they give him the information he needs!?! Sexist and stupid but utterly hilarious and fascinating. All three movies are bizarre mindblowin’ masterpieces. A must for brave thrillseekers who think they have seen everything. As politically incorrect as you get! Japanese Trash Cinema rules!!!