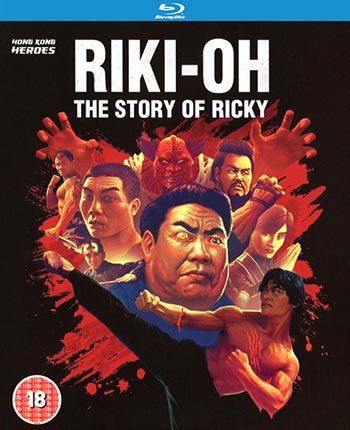 Hard man Ricky is incarcerated in a futuristic prison where ultra-violence is his only means of survival in the corrupt, sadistic system. He must battle his way quite literally ‘through’ the feared ‘gang of four’, and undergo multiple tortures before facing the governor in one of the goriest climaxes ever seen.

Close second to “Dead Alive” as goriest film ever made. Rivers of ridiculously over-exaggerated red will fill your screen and turn your stomach.

Riki was just an innocent (though super-powered, think Mr. Incredible) youth until the day his girlfriend was killed in a botched rape attempt by gangsters. After dealing out his bloody revenge he is carted off to prison where he wishes to serve his sentence as peacefully and undisturbed as he can. However, this pseudo sci-fi Asian prison is any thing but peaceful. Prison film clichés ensue (ie. corrupt guards, an evil warden, an escape attempt).

Technically speaking, the movie isn’t very good. The sets lack believability, the dialogue is pretty horrible, and the acting is way over board. The bad guys seem to be bad because they can be…either that or they are just bored, one or the other. Outside of Riki, there is no background attached to any of the characters and none of them are ever developed properly. Additionally, the plentiful fight scenes aren’t choreographed very well. Top it all off with some of the cheesiest kung-fu dubs ever recorded and you have a film suffering from lack of talent.

So why the positive score? This is a damn fun movie, that’s why. Each and every fight scene ends with a gory display of gruesome blood letting. Heads crushed, stomachs torn open, eyes popped out, faces cut off, one villain even tries to strangle Riki with his own intestines. Amidst the crimson flow, the dumb-as-a-brick story is awash in unintentional humor; the more serious it takes itself the funnier it is. Even the gore itself makes for a joke, it’s so over the top it ceases to offend and becomes a sight gag.

Main stream viewers will not get this movie and will simply not like it. Genre fans, however, will find the holy grail of gore flicks.