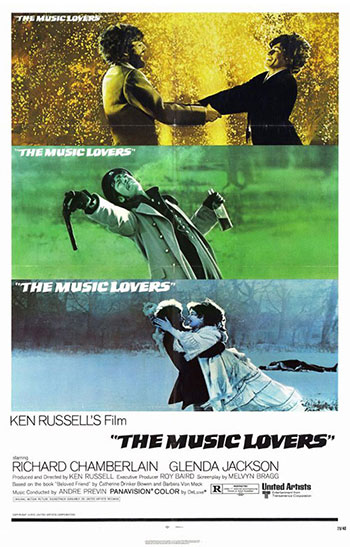 The compelling and bizarre story of Tchaikovsky’s life and music. In Ken Russell’s own words: “It’s the story of the marriage between a homosexual and a nymphomaniac.”

“The Music Lovers” captures the Ken Russell style at its best. It’s a full blown expression of his romanticized, shocking, exaggerated biographies. Russell’s excessive style contrasts the supreme beauty of Tchaikovsky’s music with the turbulent, tormented, messy life from which it arose. The visual flights of fancy succeed in conveying the musical transcendence. Performances go way over the top, but the treatment calls for it. Richard Chamberlain bravely goes where few actors would in 1970. Glenda Jackson is absolutely fearless. She’ll do whatever it takes, from writhing around nude to shaving her head. There’s no denying the film is a deliberate assault on the senses, but thoughtful viewers will leave with much to contemplate and digest.