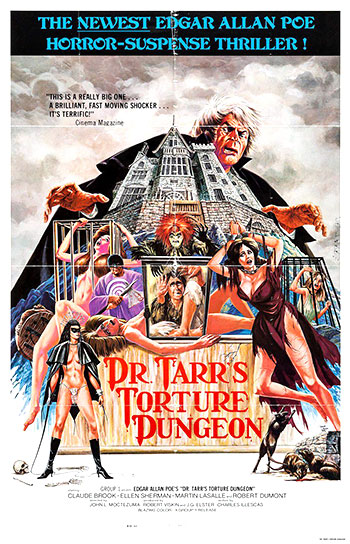 A mysterious man is sent deep into the forest to investigate the bizarre behavior of the notorious Dr. Tarr. What he stumbles upon is the doctor’s torture dungeon, a hellish asylum completely cut off from civilization and presided over by the ultimate madman. Innocent people have been savagely chained, tortured and stuck in glass cages, then forced to take part in gruesome games of ritual slaughter.

“The Mansion of Madness” is a long forgotten surreal horror comedy from directer Juan Lopez Moctezuma. Most notorious for “Alucarda”. “Mansion of Madness” contains a couple cast members from “El Topo” including cinematographer Rafiel Corkidi. The movie is loosely based on a short story from Edgar Allan Poe. The plot concerns a weird and deranged insane asylum where the patients take over and make up their own rules. Doctors out of the way! There’s rooms full of crazy lunatics including people who act like chickens. Actor Claudio Brook is in charge of the madness. Fans of Jodorosky, Arrabal, Fellini and Ken Russel will definitely find this film enjoyable.